﻿﻿ ﻿﻿We drove from Port Charlotte to Miami last Thursday, spent the night at a hotel next to the airport, then flew to Cancun on Friday, landing mid-afternoon. A half hour taxi ride to Porto Juarez and a twenty minute … END_OF_DOCUMENT_TOKEN_TO_BE_REPLACED

We have traversed thirty three degrees of latitude in the last week and what a week it’s been. After a couple of days visiting the southern kids we left the Lil Snoozy parked in Ami and Josh’s back yard and hit the road for Marine City (10 degrees north). It’s a long boring drive but we made good time driving a lot faster than when we pull the trailer plus not so many trucks on the freeway on the weekend.

Monday through Wednesday were devoted to chores, dentist appointment, hair cuts and reconnecting with some local friends. As planned, no surprises.

Thursday morning we left for Chicago (2 degrees south) with a utility trailer full of furniture from our attic to help Matt and Renee furnish their new house. Weather forecast was for occasional snow showers but no accumulation. So much for the forecast – the first snow squall had us doing 30 mph on I 94 a half hour after we left home. Lake effect snow was so bad on the west side of the state speeds averaged 35 – 45 mph until they averaged zero between Kalamazoo and Benton Harbor. The MDOT website showed the freeway closed 6 miles ahead due to a accident. We made a U turn through the median and backtracked a few miles to get off and take a country road west.

Palm trees had filled this windshield a few days earlier, what the heck were we doing here? Snow tapered off as we got out of the lee of Lake Michigan however we traded snow for Chicago rush hour traffic on the Dan Ryan. Arrived at Matt’s 3 hours later than we expected. Temp hit -3 that night. We waited until the next morning when it was a balmy 12 to move the furniture in.

Had a nice visit though and enjoyed helping with painting and other chores as he and Renee work hard to turn their new house into their home.

Sunday we flew from Chicago to Cancun, Mexico (21 degrees south). We aren’t sports fans but thought Superbowl Sunday was wonderful. Everyone was home watching the big game except us. Our Sunday travel experience by the numbers: 19 minutes drive from Matt’s house to O’Hare; 13 ticket agents at the American counter, 2 customers (us); zero people in line ahead of us at security; 75% of the seats on the airplane empty; 2 people ahead of us in line at Mexican Immigration; zero people in line at customs. I did not make any of this up! Our 21 degrees of travel ended with a nice late evening dinner on the terrace of the Airport Marriott Courtyard.

The next morning we planned to take a taxi to the ferry port a few miles north of Cancun then take the ferry to Isla Mujeres where we will spend ten days visiting our friends George and Diane. George is a volunteer teacher at a school for Special Ed students on the island.

The taxi ride was a lot more exciting that we expected. The driver passed a bunch of cars on the right only to ram his car under a truck turning right from the middle lane.

We were in the back with our seat belts on and we couldn’t have been going more than 15 or 20 mph when we collided so no one was hurt. The taxi driver and two guys from the truck got out and just stood there looking at the damage with “Oh shit” looks on their faces. Surprisingly, no yelling. Another taxi stopped for us as the taxi guy was getting our suitcases out of the trunk and we were back on our way.

George and Diane met us at the dock on Isla and we all walked the couple of blocks to our hotel. George has been living here since last August and seems to know everybody. He got us a great rate at the Hotel Rocamar. We are on the very northern tip of the Island with water on three sides. Here’s the view east toward the Carribean

Unpacked, got our suits and snorkel gear and walked a few blocks to the Avalon reef lagoon. Swimming was great in the crystal clear 80ish degree water and a good number of tropical fish (and one small Barracuda) to see. Afterwards fresh grouper in a nice sauce and a couple of Mexican beers for $10 at Picus right in the sand on the beach.

We finished our first day in Mexico lazing around the pool, writing then walking around town shopping for a restaurant. The main street in the center of town is pedestrian only and lined with restaurants, bars, sombrero stores, etc. George recommended Rolandi which had great Italian food. Here’s the usual dinner table picture. 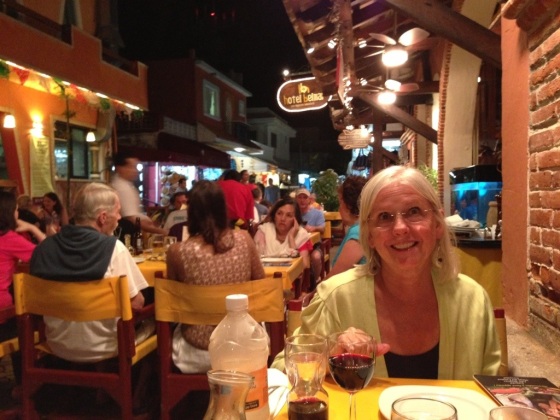