We left with Snoozy on our semi-monthly trip south to see the kids in mid-October. After several days in Enterprise visiting, then a week camping on the Florida panhandle, then a few more days visiting we returned to Michigan in early November. The trailer is now parked in a covered RV storage lot in Enterprise awaiting our return in December. No worries having to tow it through the salt and slush from an early “winter weather event”.

Gotta love the rocket. We started our winter travel blog with this same shot last December on our way south. Stopped at the Alabama welcome rest area on I65 southbound for a pit stop and photo op.

Grayton Beach State Park was home for the first three days of our camping week. We were able to check in early, drop the trailer, unload our bikes and ride into Watercolor for lunch. Chan’s Wine World is one of our favorites. It has a bistro feel with great pizza, plenty of outdoor seating and half-price wine until 6:00 PM. Afterward we got the trailer all squared away, lazed around for awhile, went for a walk, showered, had dinner and called it a day.

A day at the beach.

If you have read many of our blog posts you know we enjoy the beach. Today was our first full day at the beach since last April and proved the aphorism ‘absence makes the heart grow fonder’. We arrived here yesterday (10-23) after spending most of the prior week visiting with our children and watching our grandchildren while their parents had a get-away weekend in Asheville, NC.

Our day-at-the-beach begins for Sue at 6:30 and me at 8:00 with coffee and internet surfing until 9:00. Then breakfast until 10:30 at “Another Broken Egg” in Grayton Beach. They have large (and pricey) meals but we overcame that by splitting a roasted veggie omelet.

Back to the campground nestled in our little square of jungle for an hour and a half of reading, starting out wearing sweaters sitting in the full sun and ending in shorts and t-shirts in the shade at noon. Indian summer here is, in my opinion, the nicest time to visit Northern Florida. The weather is generally clear and dry with highs in the mid 70s to low 80s and lows in 50s. The crowds are gone but the ocean is still warm.

Lunch at the picnic table at noon. Sue made this great lentil and beet salad for dinner last night and there was enough left over for lunch accompanied by a cold crisp Gala apple with Gouda cheese. By 1:00 the lunch dishes were done, a few more pages read and we were ready to crank up the activity level.

We biked the 2.5 miles to Seaside for bookstore browsing and a cup of gelato, rode back around 2:00 and headed for the beach. We biked the half mile to the beach access and started walking west from the park toward Grayton Beach. There are a series of inland lakes in and behind the sand dunes along the coast here, one of the few places in the world these exist. One of the largest, Western Lake, is here in the park. An arm of the lake extends to the gulf. Sometimes it is blocked with sand, sometimes a storm will open up a channel into the lake so it becomes tidal until the shifting sand fills in the channel again. We have been to the beach here several times over the last couple of years and the channel has never been more than a few feet wide and a few inches deep but now it’s a regular river, maybe 50′ to 100′ wide and fast flowing with the falling tide. We found a spot upstream a few hundred yards where it was no more than knee deep so we could wade across and continue out beach walk. We later were talking to a local woman who said they had 22″ of rain July 3 and 4, the lake overflowed and cut the new channel to the gulf and tidal flushing has kept the channel open ever since.

After a couple of hours on the beach we returned to the campground, showered and drove back to Seaside to take advantage of the happy hour special at The Great Southern Cafe. A dozen oysters for six bucks and half price wine is hard to pass up. 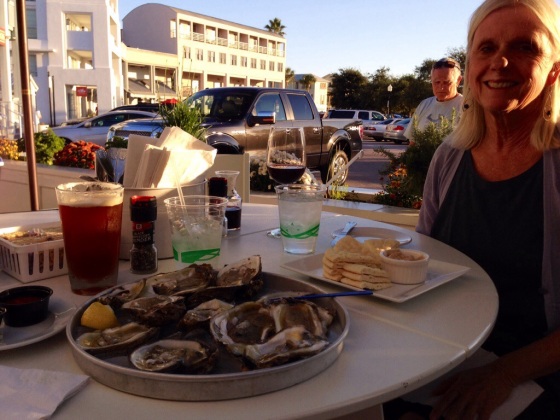 By the it was 5:45 and time to go across the street onto the beach to watch the sunset scheduled for 6:02. It was right on time! 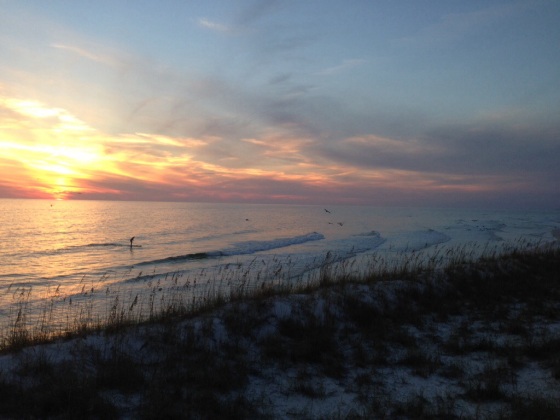 Back home but without much of an appetite we had another apple, this time with peanut butter, cheese and crackers and of course a bit of vino to wash it down.

About 8:00 we walked down toward the beach. Once away from the campground it is very dark and with the crystal clear weather we could see what seemed like millions of stars, even the faint glow of the Milky Way was visible. Venus was hanging low over the western horizon, much brighter and clearly a different color than the stars.

Now it’s 9:30; I’m snug in the camper typing up this post. All-in-all an above average day that we hope to repeat many times this coming year.

The next day was more of the same. Forgive me one more gratitious Grayton Beach picture. It really is a beautiful place. 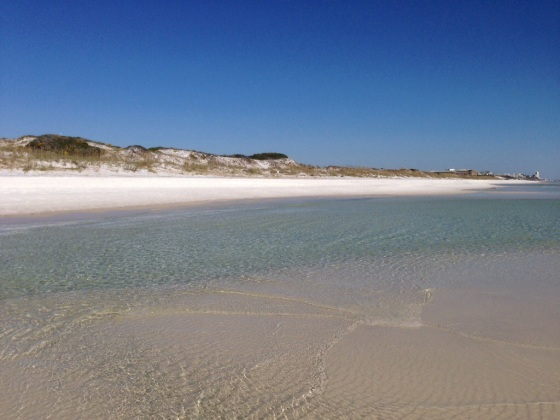 Friday morning we read outdoors and enjoyed the morning sun then packed up after lunch and drove about an hour east to Panama City Beach. The kids reserved three cabins at the PCB Navy base. We met Todd, Amanda and the kids and Ami Friday afternoon and Josh came down Sarurday.

This Navy base is a relatively small one, it’s purpose being training Navy divers and doing R&D on tiny submarines, torpedoes, etc. It’s also home to a small fleet of CH53 Super Stallions, the heaviest helicopter in the military. Their base was on a pier just across a small bay from us so we got to watch them take off and land every half hour or so on Saturday.

There was a nice fenced in playground and a small beach just across the street from our cabins so the boys could play while we watched them and enjoyed the water front too.

Sunday afternoon we relocated to St Andrews State Park, four miles further east on the end of the peninsula defined by St. Andrews Bay and the Gulf of Mexico. Todd’s family came with us to play on the beach for the afternoon. There is a very sheltered little bay along the inlet, maybe a hundred yards across and barely knee deep. I took Luke (34 months old) for a walk and told him we could go wherever he wanted and I’d tag along. His bravery muscle must have just had a growth spurt as he chose to wade straight across the bay! We had a great time.

The younger Wolfe’s left for home around 4:00 and we got the trailer set up, showered and had a nice dinner. The park was only maybe a third full so we were able to get a primo water front site.

We had to share the site, though, with a very territorial Egret. He was not shy at all. In the picture below you can see my shadow on the right foreground. 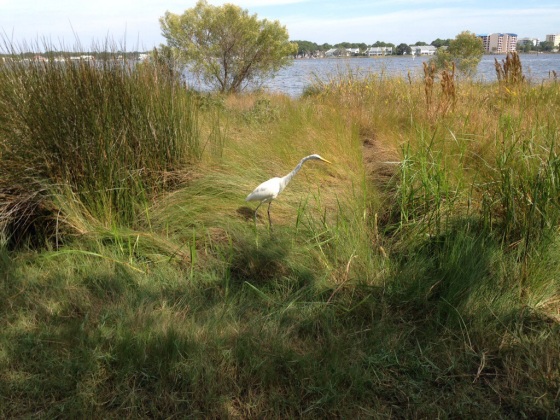 We did our usual beach walking, bike riding, etc for three days before returning to Enterprise just in time for Halloween. 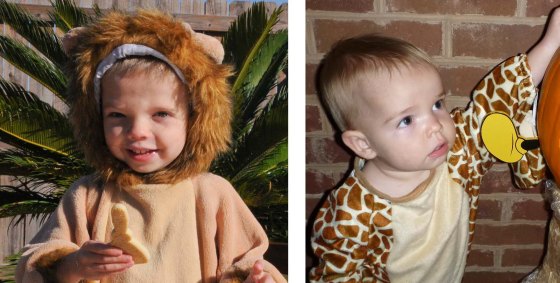 We are back home in Michigan now but will subtract about 15 degrees from our latitude the week before Christmas. Our current vague plan is to spend a couple of months in Alabama and South Florida then drift west for awhile ending up in Santa Fe NM to meet up with some Michigan friends in mid-April.